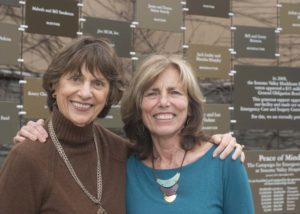 The Sonoma Valley Hospital Foundation has announced that Donna Halow and Judy Vadasz have been selected to receive the organization’s Pulse Award, given each year to recognize outstanding Sonoma Valley women who have made significant contributions to the community through their volunteerism, community involvement and philanthropy.

Halow and Vadasz will be honored at the Foundation’s 12th annual Celebration of Women luncheon on Thursday, May 11, 2017, beginning at 11:00 a.m. at Hanna Boys Center in Sonoma.  Proceeds from the event benefit women’s health and wellness programs at Sonoma Valley Hospital, including Project Pink which funds mammograms for uninsured women each May and October.

“Our two honorees this year exemplify the generous and strong community spirit that makes the Sonoma Valley such a special place,” said Dave Pier, Executive Director of the Hospital Foundation. “Donna and Judy are being honored to recognize their long-term volunteer engagement in the community and the tremendous impact they have had through their efforts. We are delighted to be able to recognize them for their many achievements.”

Tickets for the luncheon are available at the Foundation’s website, www.svhfoundation.com, as is more information on the event. Tickets cost $125. To make a donation in honor of the honorees or to inquire about sponsorship opportunities, please contact Julia Cervone at 707.935.5331 or jcervone@sonomavalleyhospital.org. 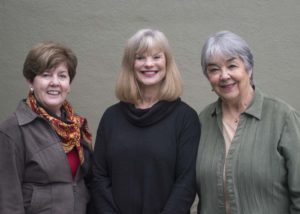 The Hospital Foundation is grateful to the community for supporting its programs and this event, notes Pier. “We are fortunate this year to have Harriet Derwingson , Kimberly Blattner, and Ligia Booker, providing leadership as co-chairs for Celebration of Women 2017.”

About This Year’s Honorees

After being part-time residents for many years, Donna Halow and her late husband moved to Sonoma to live here full-time in 2004.  She quickly became involved in local community nonprofits.  Currently, she serves on the Board of Directors of Jack London Park Partners and La Luz Center’s micro-finance program.

Donna has been supportive of Sonoma Valley Hospital for many years, including work on past parcel tax efforts and co-chairing the Celebration of Women event, as well as contributing financially to SVH. Additionally, Donna’s local volunteer involvement includes serving on boards and committees with La Luz, Sonoma Valley Fund, and Community Foundation Sonoma County; as well as efforts for Children’s Medical Aid and the Sonoma Valley Museum of Art. Her national and international volunteer efforts include the Grameen Foundation and the Okizu Foundation.

Community involvement for Judy Vadasz began in the early 1970’s. She helped start and run a preschool parent cooperative. Later, she spent seven years as a guidance assistant at Mountain View High School working with at-risk freshmen.  Other projects included Interplast, KQED, and two political campaigns.  Judy was a co-founder and long-time board member of Sonoma Plein Air Foundation.  She and her husband Les have supported many nonprofit organizations in Sonoma, including a significant donation to Sonoma Valley Hospital that was leveraged into broad community support for the building of the new Emergency Department.

Judy grew up in Lincoln, Nebraska and met Les when she moved to the Boston area.  They have been married since 1964 when they moved to Silicon Valley where Les spent his career in the technology industry. Judy and Les bought their property in Sonoma in 1997 and developed the vineyards and designed and built their home over the next two and a half years.   They continue to live in two places but the bulk of their time is spent in Sonoma. Their two sons and two grandchildren, as well as Judy’s mother, live in the South Bay, the “other” home of Judy and Les.